No of Designers involved

Woolworths is an Australian supermarket/grocery store chain that specialises in selling groceries, health & beauty products, household products, pet and baby supplies, and stationery items. Known for being a leading innovator in retail in Australia, they were investing over $1 million research at the Queensland University of Technology (QUT) for innovation in retail .

This was my first design challenge and I undertook this project with no shopping experience at Woolworths since it was my 5th week in Australia.

What should Woolworths do differently in their retail network(store formats, products/services, digital service offering, customer experience etc.) to improve customer loyalty and retention? – Woolworths Woolworths, Australia’s largest supermarket chain were finding hard to compete with other rivals (big stores and brands) such as Coles, Aldi and IGA. On top of that, the supermarket chain also observed a massive decline in the number of customers who used to shop regularly at Woolworths.

Our main goal was to Strengthen  Woolworths' Brand Name by filling the gaps in customer needs and expectation to create customer retention & customer attraction.

MAKE OF THE TEAM

I  worked as a lead user researcher throughout the design challenge. I was accompanied by a business analyst and a ux designer. I produced all the deliverables included in this case-study and presented it to the stakeholders.

Sure Woolworths is an Australia’s largest supermarket chain, sure anyone capable of shopping could be a potential user, but hey we can't design for everyone. To narrow down our user group we conducted brainstorming session. Each one of us sat down with a pad of sticky notes and wrote down different user groups for potential users. We then assembled and arranged the sticky notes in a grid based on the amount we expect to learn from that group of users and Ease of access. Based on our result, we decided to target the group of user who we thought were worth solving the problem for i.e. Shoppers between the age of 20-25 Y/O and currently employed.

We agreed on not having more than one user group to prevent ourselves from the risk of losing focus. When designed for every user group, any ideas or suggested features would fit for at least one user group making project out of control.

Our focus on the Australian working population has nothing against other age-group or diversity. We just needed one community group to focus on, since different factor affects the way people think and act. Ours happens to be just this user group. We also had a group of other stakeholders which I haven't included in this case study since they were out of my scope.

Despite the given facts, they wanted us to conduct our own user research. Woolworths marketing team conducted some insight research beforehand, but the problem seemed too general and It looked as if it was out of context and we had no idea when, where, or how they conducted the research, what was the user demographics or what is and what is not data?

Keeping the problem provided by Woolworths in mind, our design team visited 30 supermarkets including Woolworths, Coles, Aldi, and IGA (around 15-20 mins observing customer behaviours, checkout counters and shelves) for  a week between 5-7 PM as well as  Early morning (Ideal time for shopping: before and after Work). We then observed the behaviour of shoppers and added it to our notes.

Note: It was just a plain observation, nothing detailed 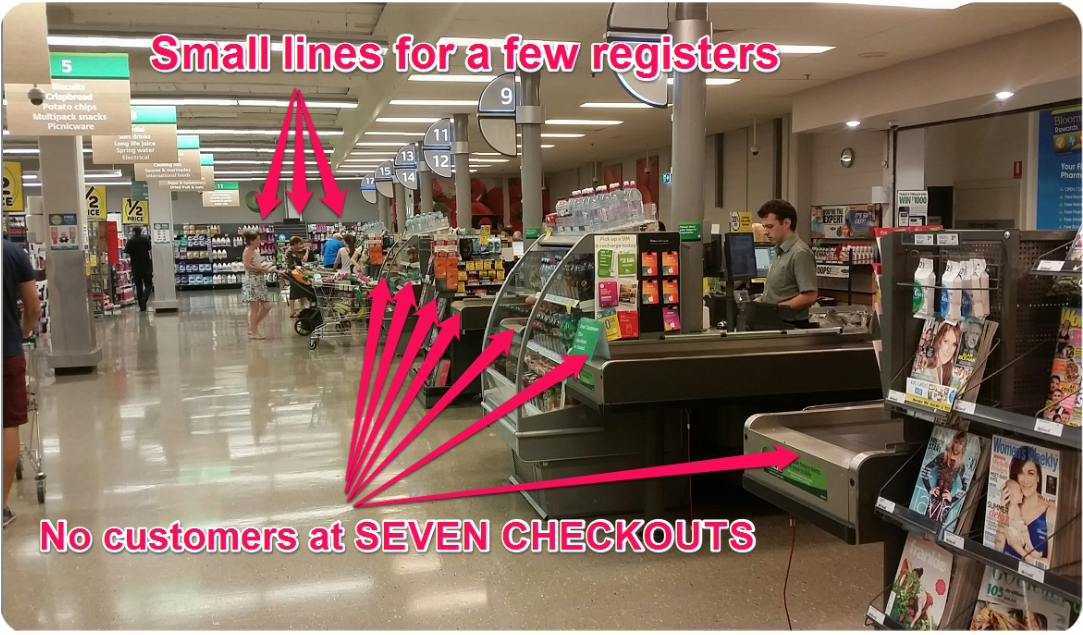 What was obvious during these observations was that out of seven checkout counters at most of the Woolworths, at least five of them would have little to no customers for more than two hours. However, the case was completely different to their competitors as we found their service checkout counter full of customers. 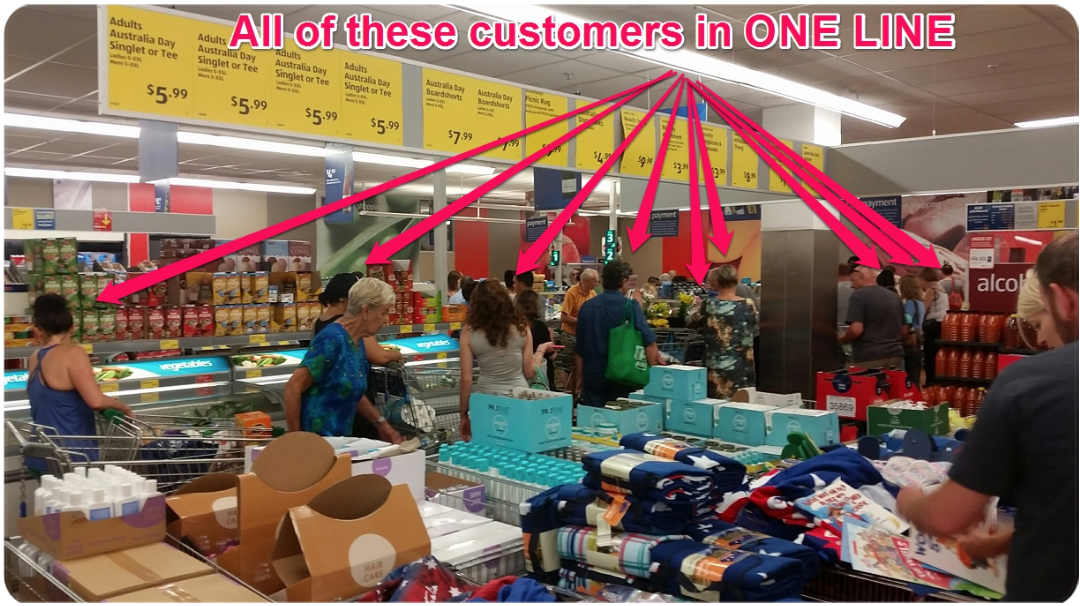 Customers at checkout: other competitors

Main Takeaway from this observation:

As reported by the Woolworths team, the fact validated that Woolworths was indeed loosing its customers to other competitors or wasn't able to make their store appealing . However what was interesting is the reasons provided by the marketing research team for lack of customers wasn't adding up i.e.  shelves were found restocked and we weren’t able to find any expired product during our observation. We hypothesized that there were way too many competitors right next to Woolies stores, which might have divided the users who used to be loyal.

We also came up with 5 persona's based on this observation which were referred throughout the whole strategy-design process to recruit/validate our ideas.

Recruiting Users: We screened and recruited  5 shoppers with characteristics of our eventual customers within 20 KM radius. We then got an Informed Consent document signed from our research participants in order to shadow their shopping experience. As a form of compensation to the users we had two options in mind: either to pay for their next grocery shopping, or to provide them with gift-card. We decided to go with the gift-card option which were to be provided at the end of the observation/interview session, because letting them know that we will be paying for their grocery would very likely influence their shopping habit.  Meaning, some users might purchase things that they don't need at all, while others may restrict themselves. This might lead them to shop differently than their regular shopping habit. Instead of giving our recruited users, time and location we asked our customers to inform us the next time they are going grocery shopping, our idea behind this again was not to influence users with our ideas, or put them on a test condition, rather to let them do everything naturally, as they would on regular basis. We won't be able to disclose all the information from our contextual interview due to ethical considerations, but the deliverables provided below are the takeaways from some of the shoppers behaviours and their shopping experience. 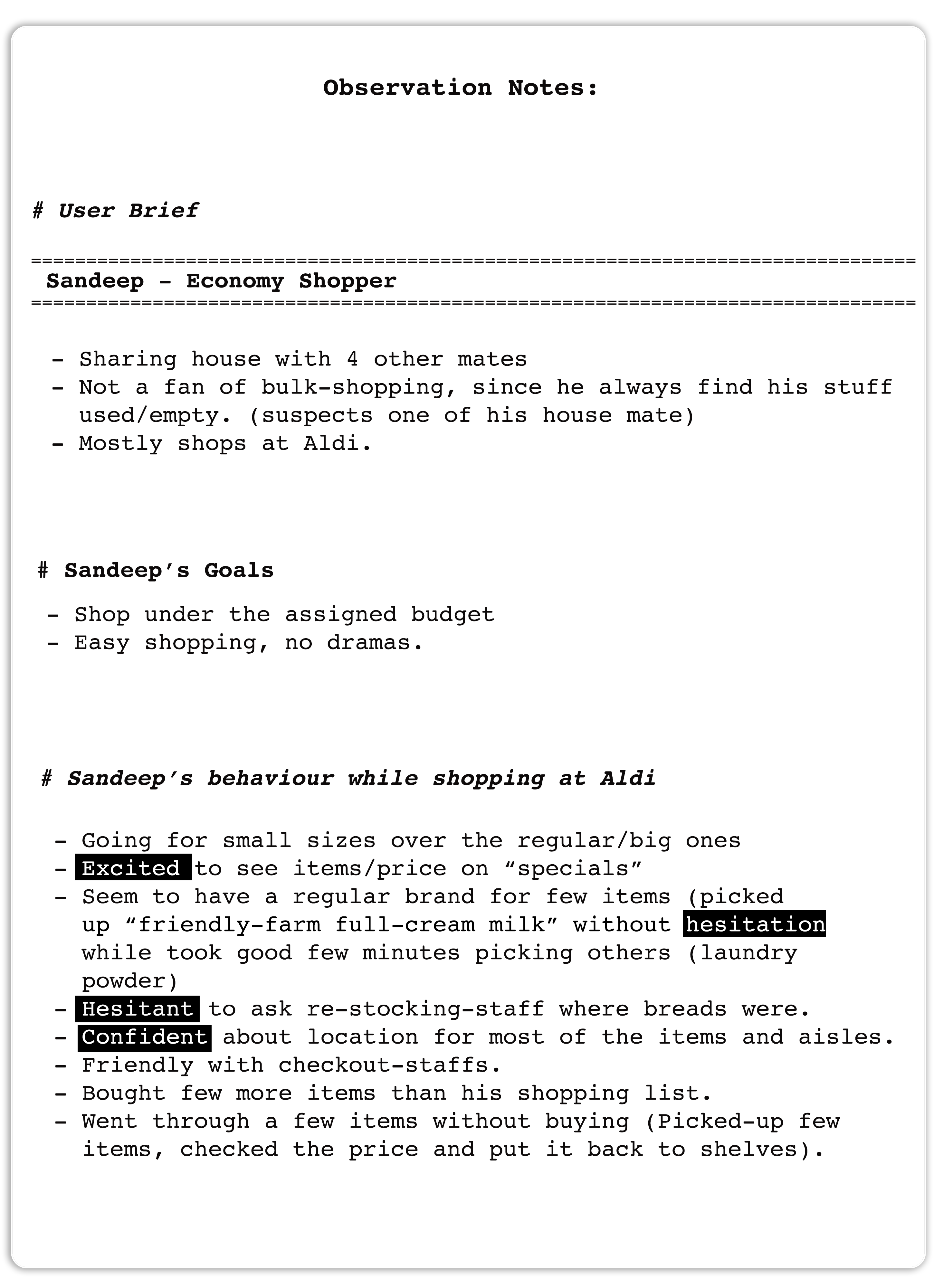 With our written consent signed, We shadowed our shoppers, the observation notes above is the documented form of what we observed during the shopping experience.

We also used an empathy map to understand our user needs and to develop a deeper understanding for who we are building solution for. The images below shows persona and Empathy map for two of our users.

Since our, research process was contextual interview, it was not timed or scripted, but we did came up with a few interview questions as a guidelines. While coming up with these questions, we mainly took three of these points in consideration:

• Motivations: What is the user trying to get done?
• Activities: How does the user do it at the moment
• Problems: What are the pain points / happy moments with the current process? 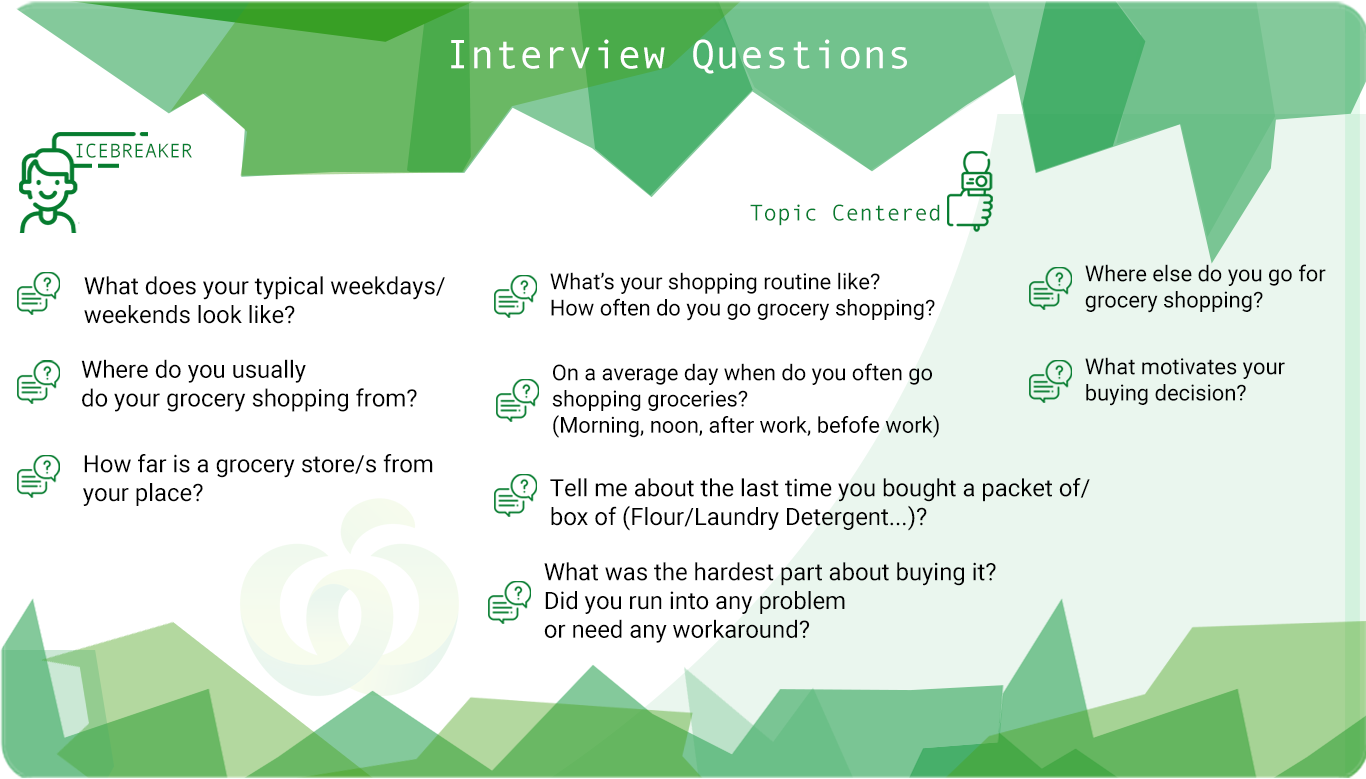 We planned and created journey map for all shoppers-personas but we wont be able to include everything on this project. During this process we figured out: for some customers, the journey started right-off with Woolworths while for the others it started only when they couldn't find their desired item at other stores (competitors)

For instance for Paige even though her ideal shopping destination was on Coles. she wasn't able to complete her journey based on her expectation, and that was when she decided to give Woolworths a go. During this shopping experience with the competitor we tried to gain her insights on what excites her, what made her decide Coles was better than Woolworths, what would make her journey successful and what were the pain points we could improve. 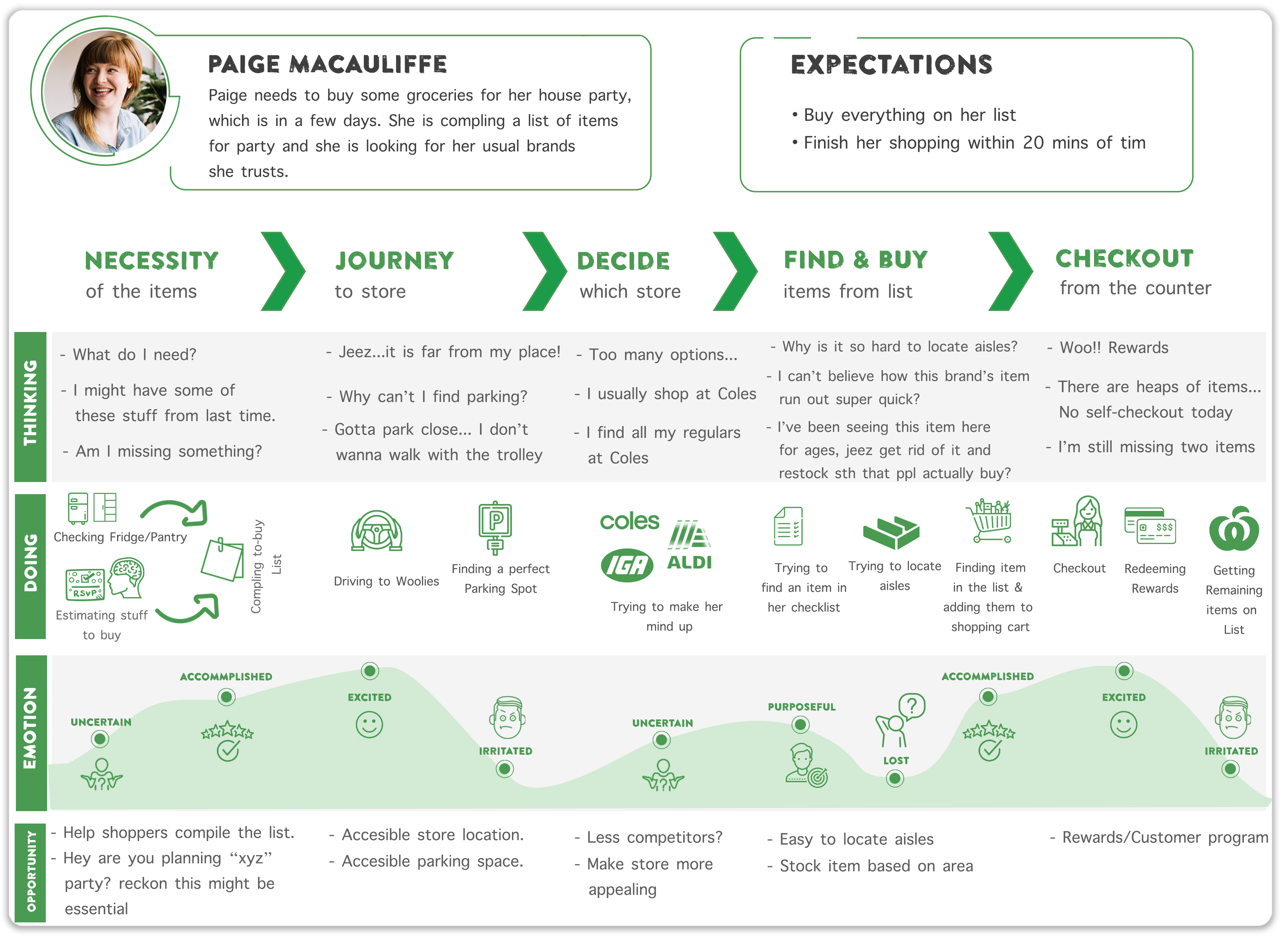 Journey-Map for user (Paige) with respect to their shopping experience

We had initial problem handed-in to us and the problems the we hypothesized at the begining after the general observation. Now that we collected enough data on shoppers habit, observation, their behaviour, their journey plan, and some insights from their interviews, it was time to narrow down what needed to be done in order to increase retention and what hinderances they were facing. For this we used Affinity wall and categorised users problems based on their nature. 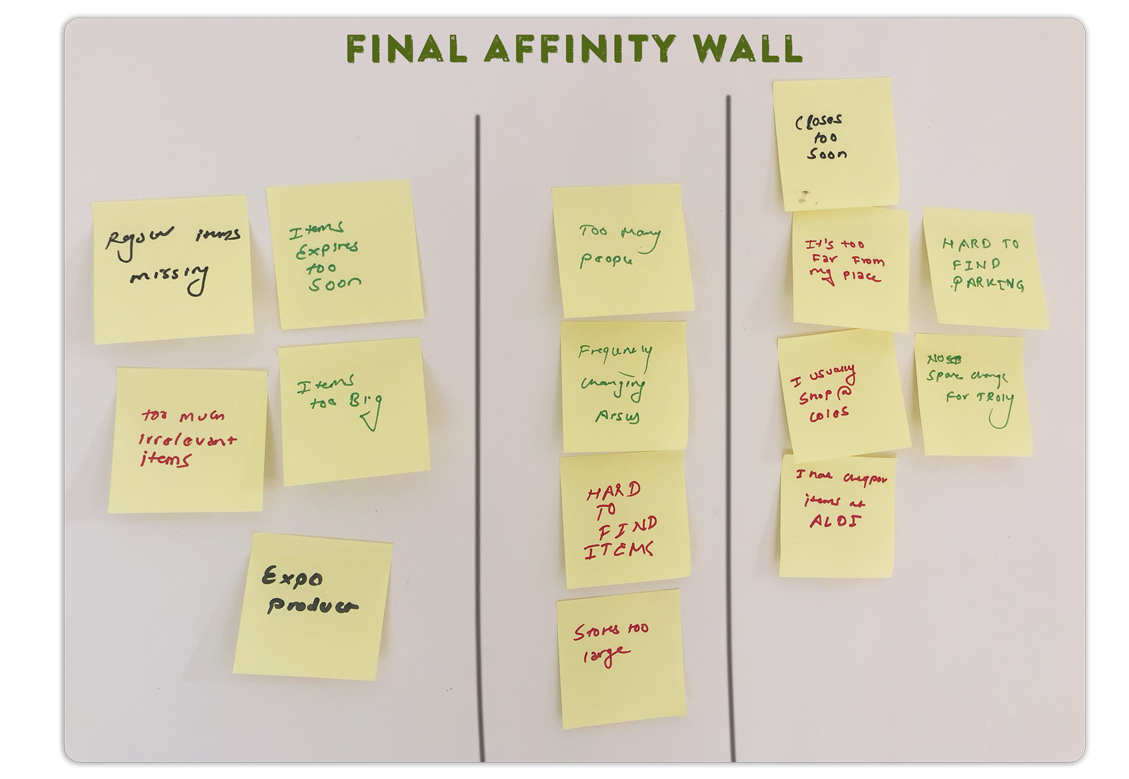 Summarised Affinity wall that represents all the problems

We classified problems of similar nature gathered from the affinity wall based on users journey/interviews and populated the table below. We thought this would help us deal with them individually and in a way that we could diagnose them on the basis of the structure (which part of Woolworths, does it concern to?  management, stakeholders, store-front or customers habit) to help us design the strategy.

We thought the best way to tackle the problem, would be by finding out "why is it a problem" in the first place. For this exact case we used 5-why's interrogative technique from Toyota or in our case  (n)whys interrogative technique  i.e. until we couldn't go any further we were asking our users/stakeholders why they were having a problem? Doing this allowed us to pin-point, which part of the customer journey does the problem relate to? and which part of the service is it lacking at and where does this problem, come to play in a service design process.

Based on our conversation with Pedro, his problem (Woolworths not being his ideal shopping centre) and implementing the n(whys) technique, we could clearly see that the problem wasn't on the customer side or the store instead it was a problem relating to size of product which needed to be fixed from suppliers side. This method was perfect for us to direct the problem based on the nature 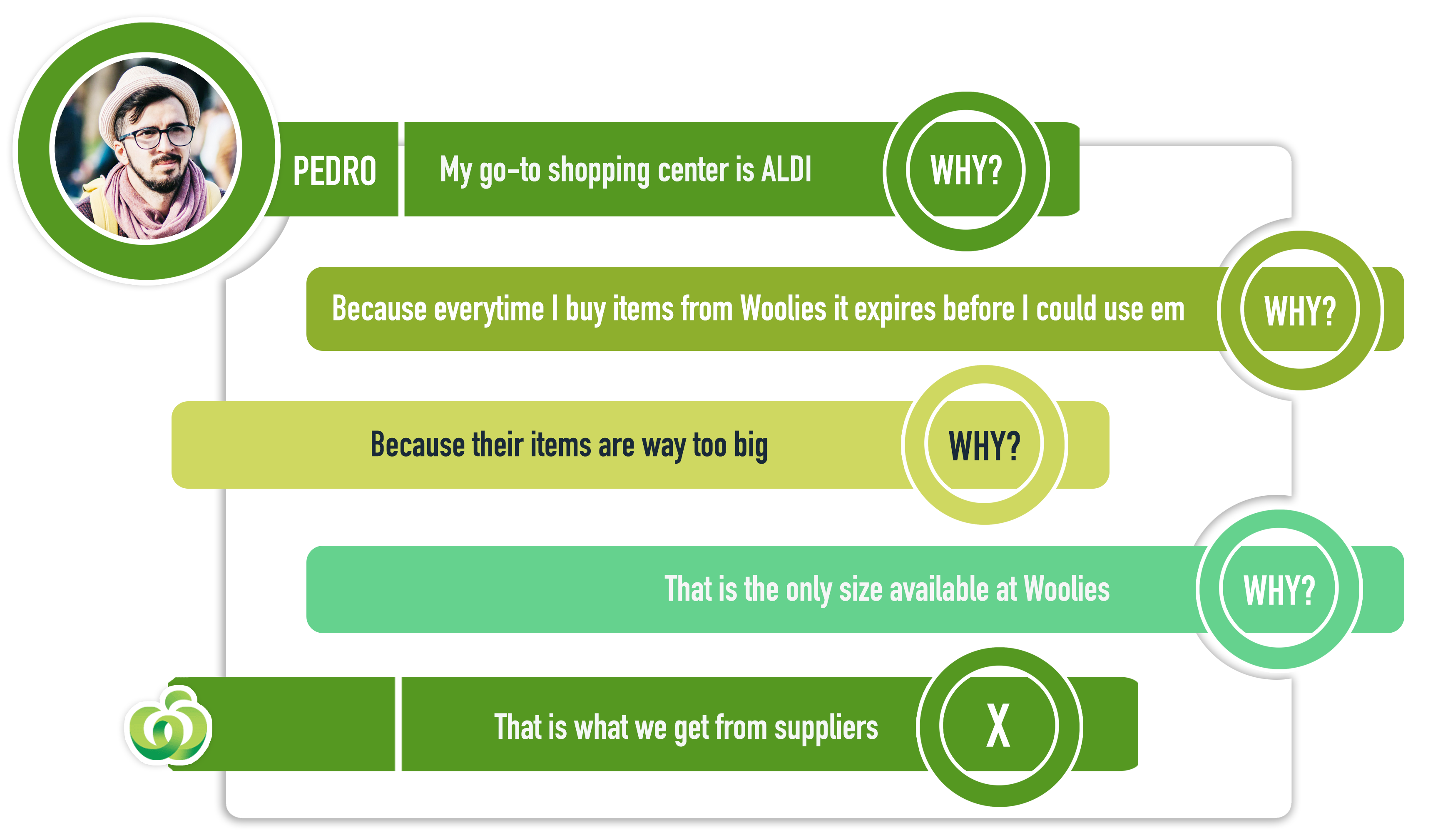 To prevent the unnecessary cluttering of this case study and to reduce the reading time, we haven't included every bit of questioning section in this part. The problem statements below is how we re-framed the initial problem statement to question. 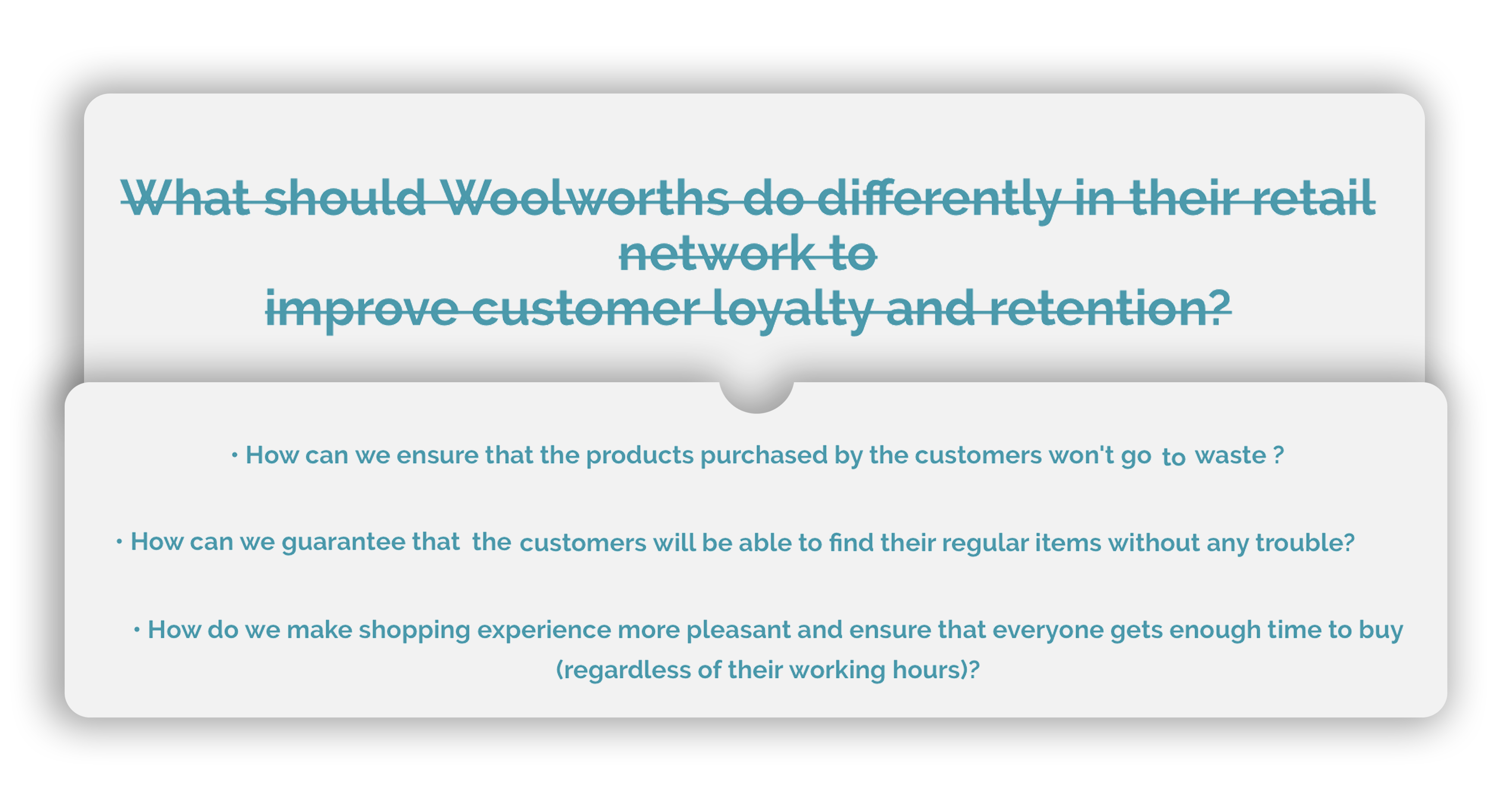 After brainstorming for solutions and filtering out actual ones that would solve the problem, we came up with the solution that could potentially work:

Having a place that would store byte-size goods and only the goods that are in high-demand in that region would potentially solve the problem. Making the store open till late would also solve most of the shoppers problem. I decided to take these solution one step ahead and thought all of these mini solutions could be further accommodated using one solution: a convenience store. 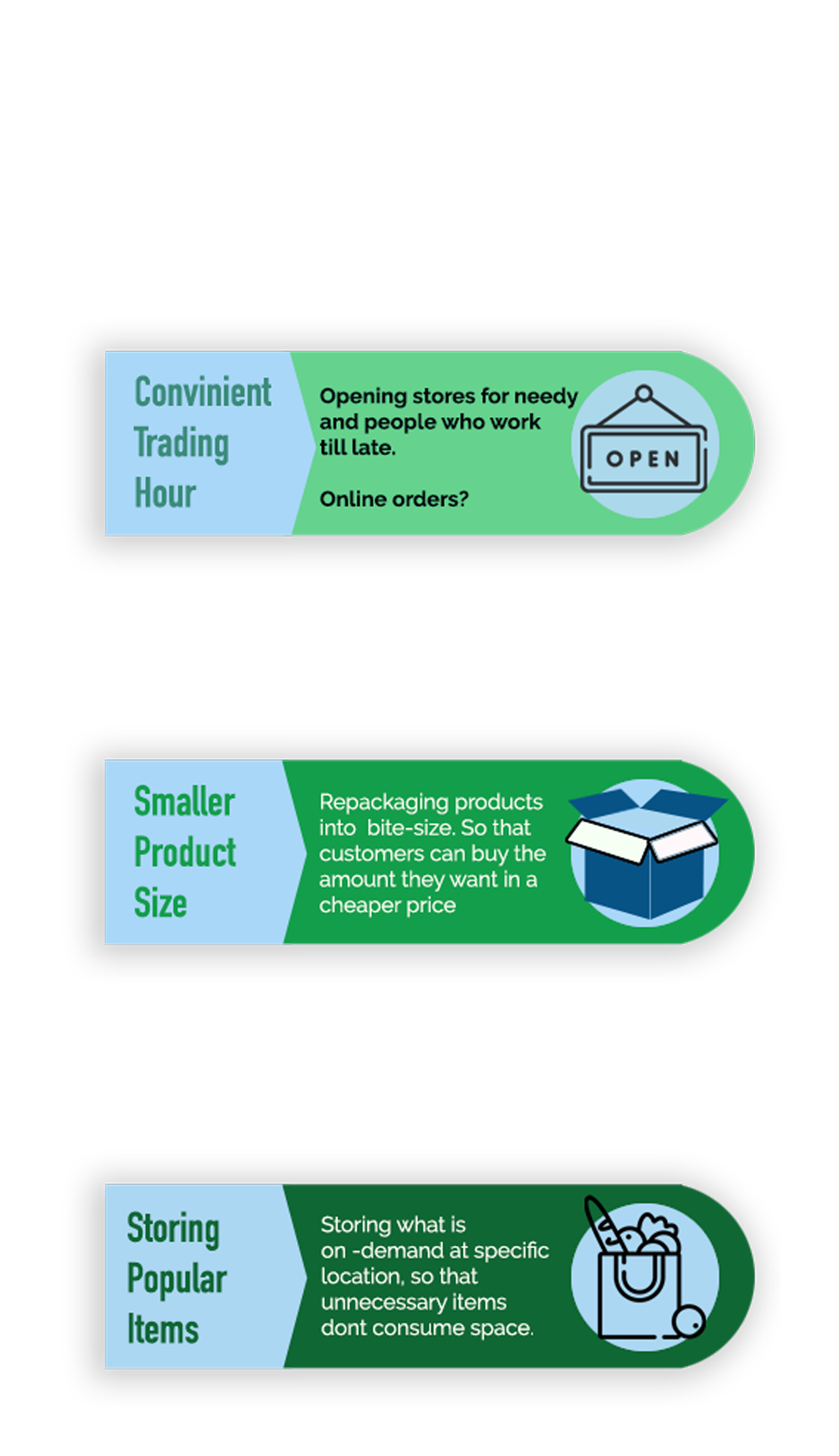 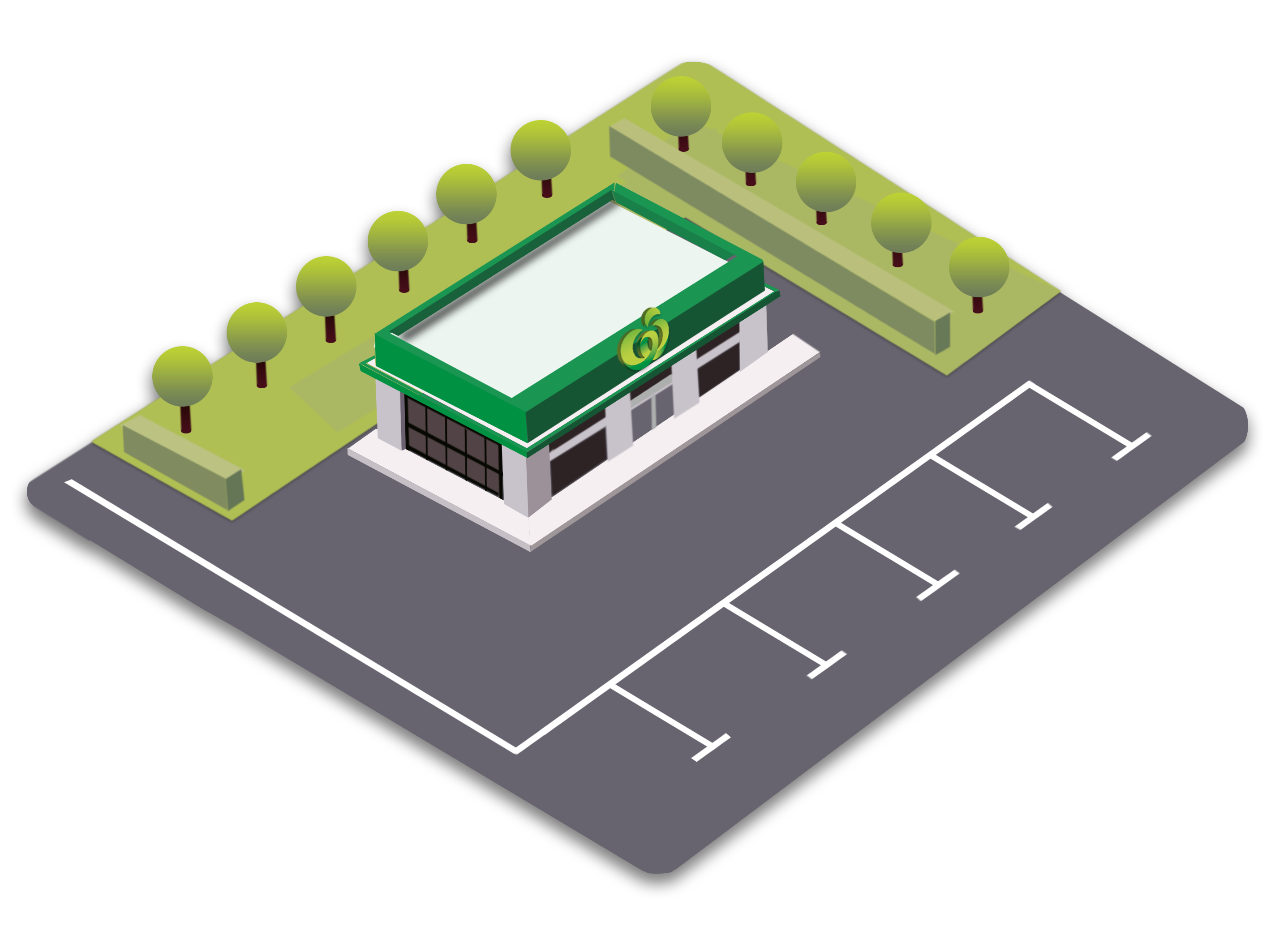 With our first set of prototype and with the help of few other role-play artists we executed role-play in front of stakeholders, decision-makers and different level of UX researchers. This role-play exercise included costumes, name tags, 3d model and props to provide the ingenuity.

Since the script alone would consume half of the portfolio page, we decided to include only first couple of pages of role-play script here.  The rest of the script for the role-play can be requested using the form at the end of this case-study.

At the end of the role-play exercises, few of the senior researchers came up with recalibration possibilities for the strategy suggested, which were also considered and taken into an account. 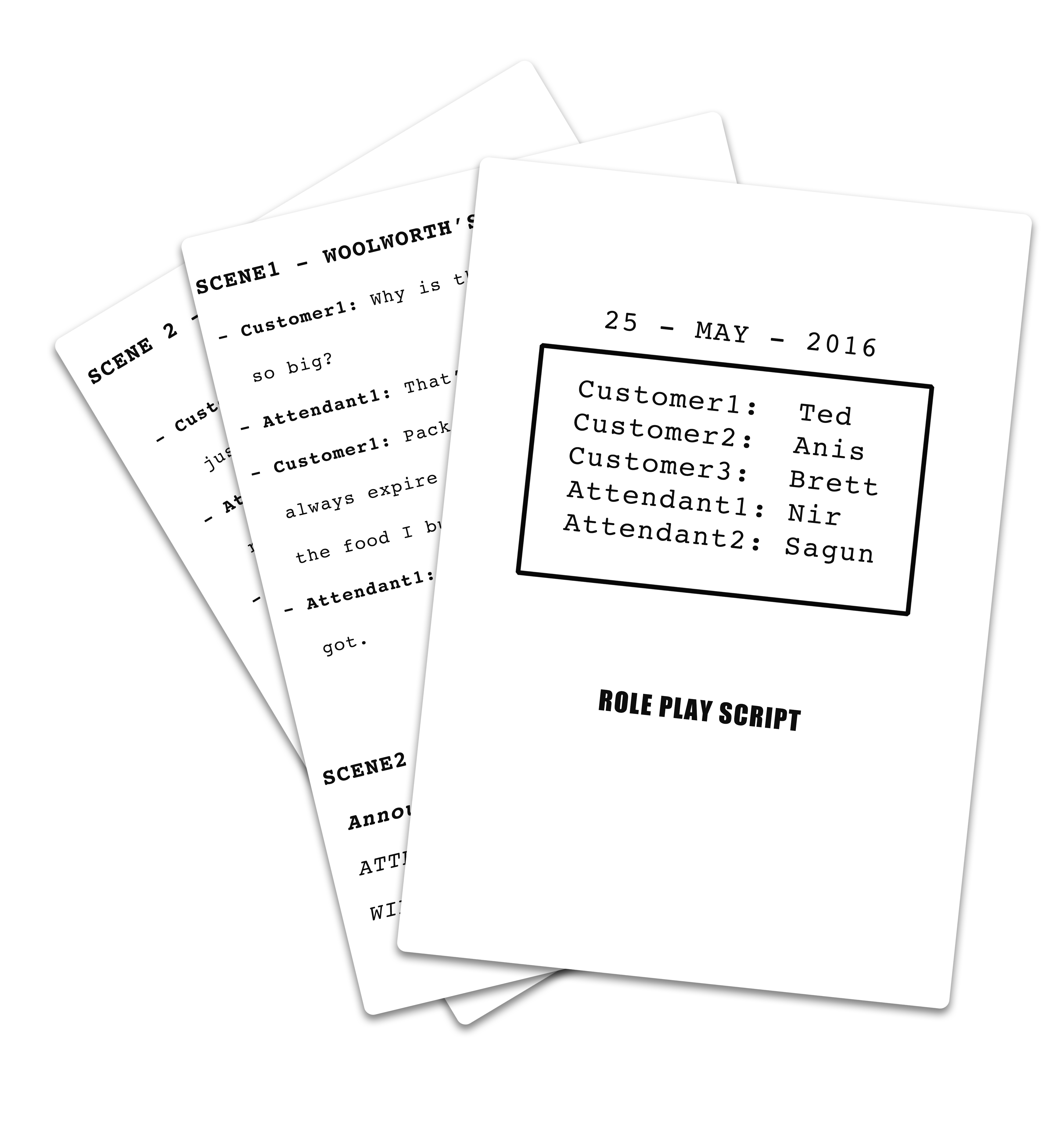 All of the research data, solutions and prototypes were handed-in to the Woolworths group.  Since this project was extremely big and had to be implemented from the higher-level and it required approval from all the board members , we couldn't get the initial feedback. Our suggestion to Woolworths group was to test the idea on one store for a couple of months and see if it would be successful.

Update: Although we can't be too sure about it (since Woolworth is not vocal about how they came up with the idea), Woolworths decided to rollout Metro by the end of 2016, which practically follows same concept and idea and so far has been proven to be successful. 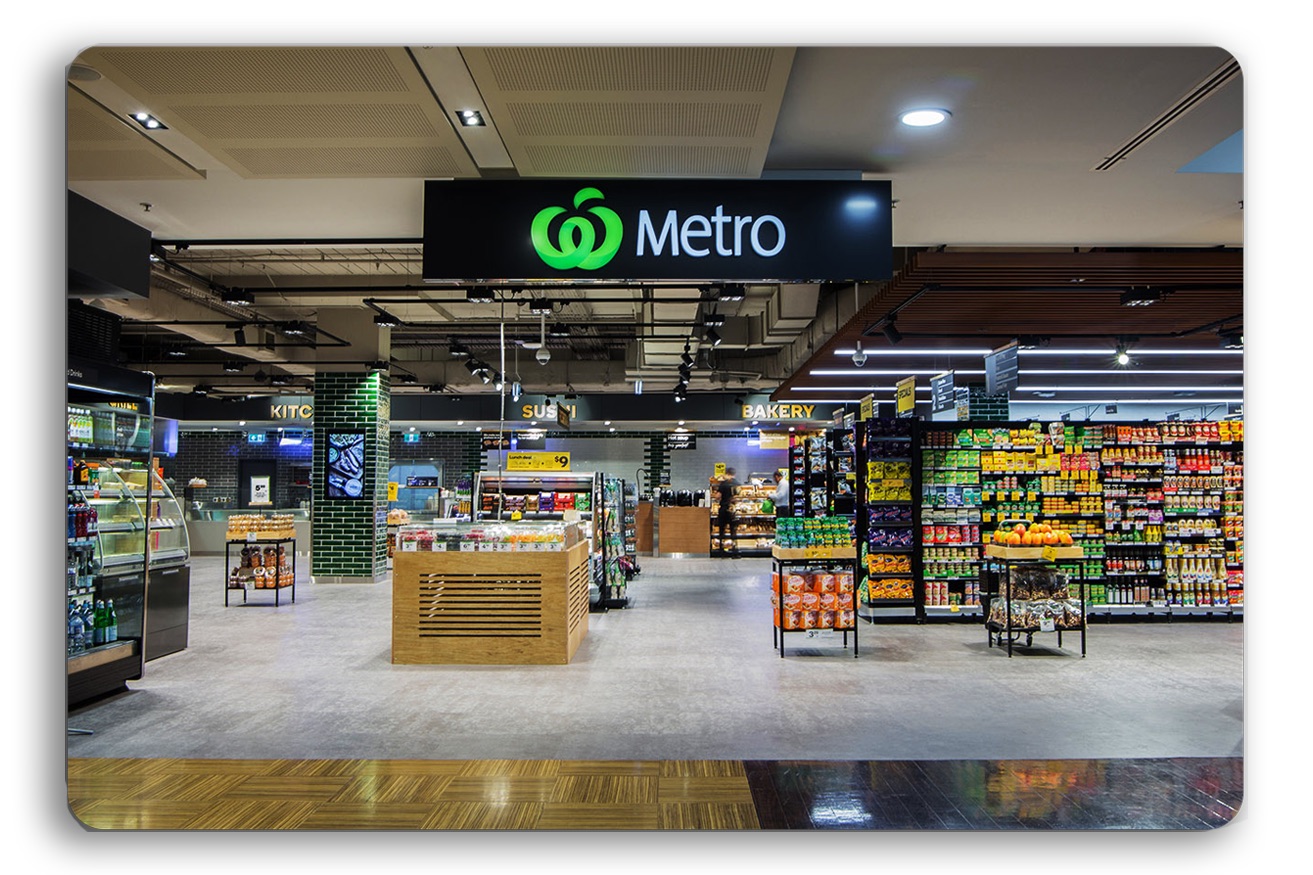 Love what you see? Let's work together 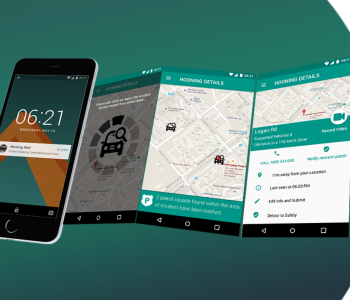 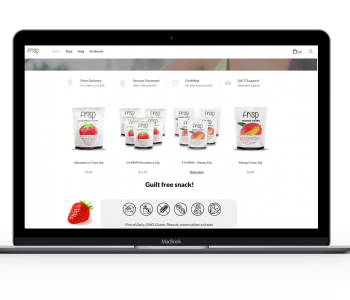